IF YOU HAVE QUESTIONS OR CONCERNS ABOUT YOUR RIGHTS, OR FEEL YOUR RIGHTS HAVE BEEN VIOLATED, PLEASE CONTACT...

Overview of Title VI of the Civil Rights Act of 1964

Title VI, 42 U.S.C. § 2000d et seq., was enacted as part of the landmark Civil Rights Act of 1964. It prohibits discrimination on the basis of race, color, and national origin in programs and activities receiving federal financial assistance. Please take time to read the articles and information below on Cultural Diversity.  It is our goal to provide our community and stakeholders with information that will enhance and better our lives.


The following articles are in PDF form....


CULTURAL DIVERSITY IN THE COMMUNITY

HOW TO BE CULTURALLY RESPONSIVE


WHAT IS CULTURAL DIVERSITY?

WHAT IS MR-DD SPECIAL NEEDS?


BEYOND THE MYTHS OF LIVING WITH DOWNS SYNDROME 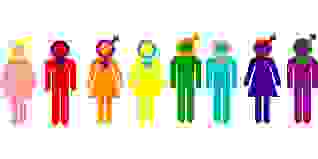 The language used to talk about LGBTIQ people is constantly evolving. New terms appear. Terms that were forgotten or unused, even terms that at some point were deemed derogatory, have been reclaimed and have entered into common parlance today. In a move towards inclusivity, the older, shorter, acronym - LGBT - has been expanded.What follows is an explanation of that acronym and the meaning of terms it refers to. It’s worth noting that these definitions are not set in stone. Definitions of terms, like language itself, are constantly evolving. Moreover, they mean different things to different people. After all, we are talking about identity, sexuality and relationships, so there are as many definitions as there are people.The (not-so) basics:

Bisexual – This term refers to someone who is sexually and/or emotionally attracted to more than one gender. This used to exclusively mean attraction to men and women. More recently the term “bisexual” is used to refer to someone who is attracted to two or more genders out of the many gender identities. Gender identity is the internal perception of one’s gender and how a person labels themselves, based on how they align or do not align with what they understand gender to be.  There are many gender identities, such as  man, woman, non-binary, genderqueer, genderfluid, or transgender.

Transgender – This term is used to describe someone whose gender identity or expression does not conform to what is expected based on the sex they were assigned at birth. Gender expression is the behavior, mannerisms, interests, and appearance a person uses to express their gender in a particular cultural context. The term transgender encompasses many different gender identities (more on this later in this posting), and transgender people have different sexual orientations, some may identify as straight, while others may identify as LGB.

Queer – Queer is often used as an umbrella term referring to anyone who is not straight and not cisgender. Cisgender people are people whose gender identity and expression matches the sex they were assigned at birth. Historically the term queer was used as a slur against LGBTQIA people, but in recent years it has been reclaimed by LGBTIQ communities. However, some LGBTIQA people still find the term offensive. Queer is also often used as a broad rejection of labels. In this context, this could be a rejection of any type of label, but most often refers to a rejection of labels for gender and sexual orientation.

Questioning – This term refers to someone who is not sure how they identify. Someone can be questioning their sexual orientation and/or their gender identity.

Intersex – This term refers to people who naturally have biological traits which do not match what is typically identified as  male or female. There are many different intersex variations. Some intersex people have XXY chromosomes, some have ambiguous genitalia or internal sex organs. Some intersex people have internal sex organs or hormones released during puberty which don’t match their genitalia. Being intersex is a naturally occurring variation in humans; it is not pathological. Being intersex is not linked to sexual orientation or gender identity; intersex people can have different sexual orientations and gender identities and expressions.

Asexual – Often referred to as “Ace”, this is an umbrella term used for individuals who do not experience, or experience a low level, of sexual desire. This identity can include those who are interested in having romantic relationships, and those who are not. People of different sexual orientations and gender identities can be asexual.

Ally – People who identify as cisgender and straight, and believe in social and legal equality for LGBTIQ+ people are allies. In many contexts, the “A” in LGBTQIA will only refer to Asexual people. The “A” is more likely to be short for both Ally and Asexual when LGBTQIA is being used to talk about a broader community that believes in the human rights of LGBTIQ people.

PFLAG (Parents, Families and Friends of